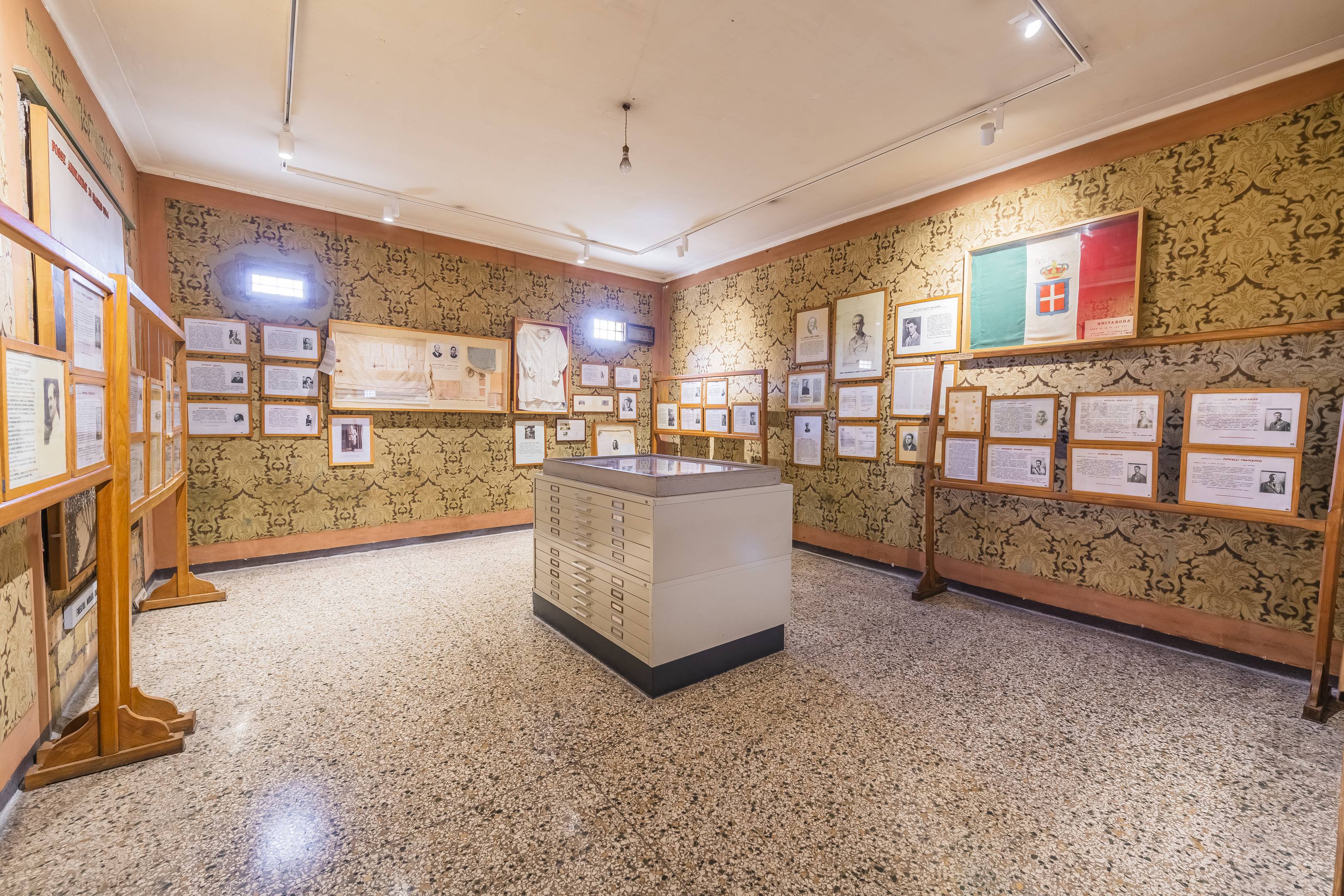 Cell no. 1 is dedicated to the 335 victims of the Nazi massacre of 24 March 1944 carried out at Cave Ardeatine (the name was changed to "Fosse Ardeatine" to identify the mass grave of the martyrs slaughtered there), as retaliation for the attack perpetrated by the GAPs in via Rasella in Rome on the afternoon of 23 March 1944, when 33 German soldiers were killed.

On the afternoon of 23 March 1944 GAP 1 partisans carried out an armed attack on occupying forces. *2 In  via Rasella  a street close to piazza Barberini, a rubbish cart filled with TNT was detonated, exploding right in the middle of an SS column, which was known to march along this street every day at the same time. 32 soldiers were killed in the explosion. Informed of the attack, Hitler immediately ordered the entire neighborhood to be razed to the ground. Convinced by the officers around him, he reduced the retaliation by establishing that fifty Italians must be killed for every dead German. The ratio was later set at ten to one, thus 320.

The commander of the “Bozen" battalion refused to provide the firing squad, since his men were "practising Catholics", and as such could not kill cold, the task of carrying out the retaliation was entrusted to colonel Kappler. During the night another German died of his wounds, so Kappler updated the count to 330. The victims to be sacrificed were brought together in the prison in Via Tasso, containing prisoners who certainly did not carry out the attack, but were fighting against Nazi Germany. There were not enough however, so Kappler asked the Quaestor of Rome Pietro Caruso to procure other prisoners. They were taken from Regina Coeli prison, to whom were added ten men captured in the vicinity of Via Rasella just after the device exploded.

On the following day, working quickly before Roman citizens realised what was happening, in the quarries on Via Ardeatina, close to the catacombs of San Callisto, the mass execution was carried out.
Various documents representing different facets of the slaughter are on display on the walls.

In the centre of the room is a showcase displaying objects recovered from the bodies, including:

On 9 September 1943, while fighting was going in at Porta San Paolo, Montagnola and other parts of Rome and province (Monterotondo, Monterosi, and so on)  representatives of anti-fascist parties came together to form the “National Liberation Committee" (CLN), taking on responsibility for the management and political leadership of the Resistance and launching an appeal to the population. The Committee was formed by Ivanoe Bonomi (chairman); Alcide De Gasperi, Giovanni Gronchi and Giuseppe Spataro (Christian Democracy Party, DC); Ugo La Malfa, Riccardo Bauer and Sergio Fenoaltea (Action Party); Meuccio Ruini, Mario Cevolotto and Giovanni Persico (Labour Democracy Party) Giorgio Amendola, Mauro Scoccimarro and Giovanni Roveda (Communist Party, PCI); Pietro Nenni, Sandro Pertini and Giuseppe Romita (Socialist Party, PSI); Manlio Brosio, Alessandro Casati and Leone Cattani (Liberal Party, PLI). The central CLN established a ”Central Military Junta" to coordinate the fight against Nazi-fascism. The movement branched into local committees. In Rome the Roman Liberation Committee had Sergio Fenoaltea as chairman, with the participation of PCI, PSI, Action Party, DC, PLI and Labour Democracy Party.
Armed formations were associated with the CLN parties: GAPs (Patriotic Action Groups) of the Communist Party, and formations of the Action Party and the Socialist Party. They all engaged in urban guerrilla activities, carrying out armed attacks and acts of sabotage. The formations of the Christian Democrats, Labour Democracy Party and Liberal Party did not participate in urban guerrilla warfare, focusing on information and propaganda activities.
Other autonomous formations arose: Red Flag was of Communist persuasion, opposed to the line taken by the PCI, the Movement of Communist Catholics, a derivation of the “Christian Communist Party” founded in early 1943, and other neighbourhood-level formations, such as the Monte Sacro Band. All of these groups would pay a heavy price in terms of wounded and killed in combat, arrested, tortured and executed.

The Via Rasella attack is commonly referred to as a terrorist attack, erroneously, as established by the ruling of the Italian Supreme Court in 1999, which called it “a legitimate act of war targeting only the occupying military forces”. The attacked company was part of the Bozen Battalion formed by South Tyrolean soldiers.

After having participated in the March on Rome, Pietro Caruso joined the Volunteer Militia for National Security, and was appointed Quaestor of Rome in January 1944. When the Allies entered Rome, he tried to escape by car, but, upon being recognised, he was handed over to the Anglo-Americans and brought back to Rome. In September 1944 he was put on trial for collaborationism. He was sentenced to death, and was shot at Forte Bravetta.

Erich Priebke, an SS captain, was Kappler's assistant at the Via Tasso prison. He spoke good Italian, learned in his youth, and he sometimes received family members of prisoners. In occupied Rome he acted firmly as a policeman and was part of the group that carried out the action against the GAP magazine, in which Gianfranco Mattei and Giorgio Labò were arrested. He helped to draw up the list of prisoners to be shot in the Fosse Ardeatine. After the liberation of Rome he worked in northern Italy as a liaison officer with the General Staff of the Republican Guard of the RSI, continuing to arrest, interrogate and torture partisans. After the war he managed to escape to Argentina, where he lived a quiet life until an American television crew found him. He was extradited to Italy in 1995, where he was tried for war crimes, accused of ”participating in numerous acts of violence and murder" in the Fosse Ardeatine massacre. In the 1996 trial he was found guilty, but could not be punished due to the statute of limitations. After a strong public reaction, the Court ordered a retrial in 1997. Having established the non-applicability of the statute of limitations to the offence committed and rejected the line of defence centring on obedience to superiors' orders, he was found guilty of ”multiple murder with premeditation", and sentenced to life imprisonment. In view of his age (he was 85 years old at the time), he was granted house arrest at his lawyer's home. He died in 2013 at the age of one hundred.

After the massacre, the SS used dynamite to collapse the vaults of the cavern where, kneeling and with their hands tied behind their backs, the 335 victims were slaughtered. Then, to confuse the smell emanating from the decomposing bodies, they dumped rubbish trucks in front of the entrance. It was only after the Liberation, at the end of July, that pathologist Attilio Ascarelli, professor of Forensic Medicine at the University of Rome, started the job of exhuming the bodies. It was discovered then that the victims were 335, and not 320, as was written in the German command statement. Prof. Ascarelli's job was long and complex, as months had passed since the massacre, but he was able to reconstruct how the massacre happened, which he then described in the report, drafted together with collaborators.

Both were arrested on 1 February 1944 in Via Giulia, where they packed hand grenades in the group's magazine, and were immediately taken to via Tasso. Mattei, professor of chemistry at Milan Polytechnic, hanged himself with his braces on 4 February for fear of revealing the names of his fellow fighters under torture. Labò, a student of architecture and an intellectual, ferociously tortured and detained for a long time in inhumane conditions, put the blame on himself, to save Mattei, as the sole person responsible for the Via Giulia magazine. He was shot on March 7 with nine other partisans.