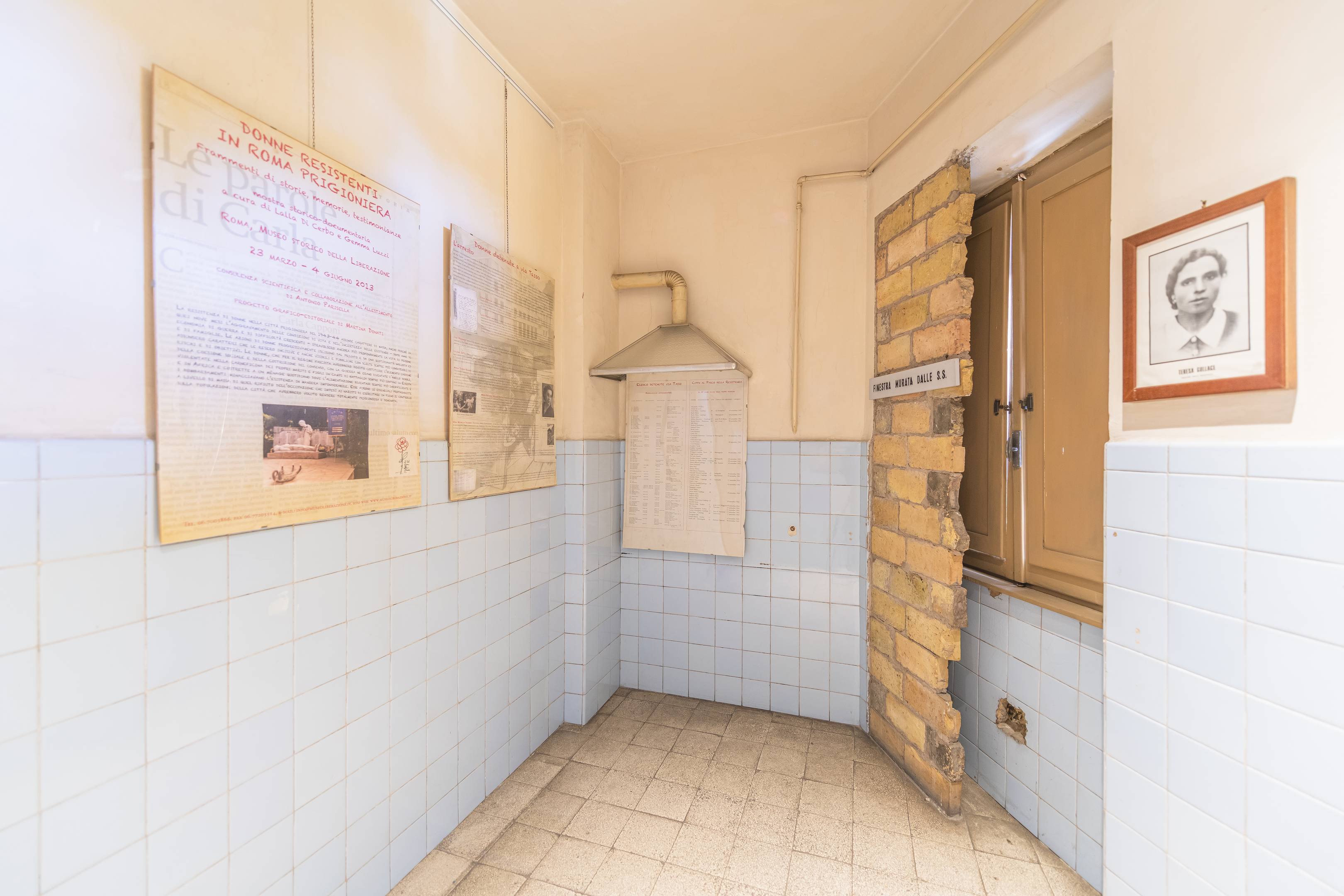 Women were to have been the cornerstone of the fascist regime,
ensuring social cohesion and building consensus. When the fascists went to war, they became its weak link. During the occupation, they gradually left the private sphere and a hidden everyday life to take on responsibilities that made them more visible and public, making choices that were increasingly aware of the risks and objectives involved. On a global level they were essential protagonists of the mass rejection of the occupation that prevented the Nazis from exercising full control over the population of Rome, whom they wanted to totally subjugate and restrain.
Many were captured and taken to via Tasso. Museum documentation has ascertained the presence of more than 200 women, but it is likely there were at least twice as many. In this cell we reconstruct their story and the many reasons for their capture.

Roman women participated in the resistance right from the start, in the first days after 8 September.
Many focused on replenishing soldiers engaged in fighting, rescuing the wounded and carrying away the fallen. Immediately after the occupation their most urgent action was to prevent their loved ones, but not only, from falling into enemy hands.
Many succeeded, even at their own risk, while some sacrificed their own lives to protect others

Sister Teresina di Sant'Anna - born Cesarina d'Angelo - was 29 years old. On the evening of 9 September, along with other sisters, she was arranging the bodies of Italian victims in the chapel of the Forte alla Montagnola orphanage. When a German paratrooper attempted to grab a gold chain from the neck of one of the soldiers lying in the chapel, sister Teresina pounced and hit him with the iron crucifix she was laying on the corpse. With a bloodied face, the paratrooper went to hit her with the rifle butt, but then refrained from doing so, and left. Sister Teresina would continue to take care of the fallen, and while she was looking for wounded to be taken to safety, she herself was shot, and would die a few months later from the wounds.

On the same evening of 9 September, again at Montagnola, 60-year-old Domenica Cecchinelli , a mother of five, left home to go and aid the wounded at the Fort.
A German soldier surprised her as she was extracting the body of a tank crewman from the gun turret. He told her to desist, and when she refused he killed her with a rifle shot.

On 9 September, together with her old brother-in-law and baker Quirino Roscioni, Pasqua Ercolani was giving out bread to the soldiers fighting at Montagnola, until the
Nazis surrounded and occupied the bakery. She was taken prisoner and then released, before being
killed by machine gun fire while trying to get away from the bakery with her brother-in-law.

The SS realised that the women of Rome were inside, not outside or on the edge of the Resistance, and captured a large number of them. Museum documentation includes both prison data cards with the name and reason for the capture, as well as many direct testimonies.
Many reasons were given for capture: from active participation in the resistance to the mothers, wives, sisters or daughters of partisans or underground soldiers who were held as hostages. Others had broken the laws imposed by the occupying forces, such as trading in jewellery, breaking curfews, attacking bakeries.

Angelini Carla, born in Rome in 1923, acted as a courier for the GAPs, and was awarded the bronze medal for military valour, adding to the war cross for military valour. Arrested as the result of a tip-off on 28 January 1944 and taken to via Tasso on 25 February, she was moved to Regina Coeli, where she remained until the day of Liberation on 4 June 1944. A communist, she graduated after the Liberation (the first woman to specialise in neuropsychiatry) and entered grassroots politics, turning down federal posts and parliamentary candidacies.

Florio Lucia: arrested on 19 March 1944 attempting to sell her jewellery, out of need, and for this reason suspected of helping the monarchy. Her husband Vincenzo, ship owner and wine industrialist from Palermo, was also arrested and detained in via Tasso for the same reason. In his diary he wrote about “her sad adventure, similar to mine, as she herself told it on the very evening of our liberation." Her story, and that of her husband, inspired the artist Guido Gregoretti to depict the women's cell in a painting.

Mancini Iole, born in Rome in 1920, was another courier for the GAPs, the wife of partisan Ernesto Borghesi. She was arrested and taken to via Tasso on 25 May 1944. She was interrogated all night long, in an attempt to get her to say where her husband was hiding. On the evening of 3 June she was taken with other women to one of the waiting trucks, but due to a breakdown it did not start. Brought back to the cell, she was released the next morning when the Americans arrived.

Michelin Salomon Vera was born in Carema (Turin) on 4 November 1923 into a Protestant family of Salvation Army officers. Having moved to Rome for work, on 8 September 1943 she joined the Resistance, in particular organising the student "agitation" Committee. On 14 February 1944 she was arrested, at the home of Enrica Filippini Lera, by an SS commando, along with Paolo Buffa, Paolo Petrucci and Cornelio Michelin-Salomon. The whole group was transferred to via Tasso. Only Vera remained in the women's cell for questioning, before being taken to Regina Coeli. On 22 March the trial took place before the German Military Tribunal: all were acquitted, but on 24 March 1944 they were still in Regina Coeli prison; Paolo Petrucci was taken and executed at the Fosse Ardeatine. Vera and Enrica were sentenced to three years' hard labour, to be served in Germany. On 24 April Vera and Enrica were sent to Stadelheim Prison (Munich) in Germany, and later transferred to the Frauen Zuchthaus in Aichach (Upper Bavaria), where they were freed by American troops on 29 April 1945.

Regard Maria Teresa was born in Rome on 16 January 1924. At high school she met and befriended Marisa Musu. She was on the front line during the Porta San Paolo clashes with the Germans. Joining the Patriotic Action Groups under the name of Piera, she took part in the attack against the German command at the Hotel Flora in Via Veneto. In January 1944, along with Guglielmo Blasi, she left a bag containing a bomb at the German soldiers' canteen at Termini station, causing the deaths of three German officers and numerous wounded. As a result she was promoted to the rank of lieutenant.
Arrested on 30 January 1944 at the home of Gioacchino Gesmundo as she was procuring caltrops to puncture German vehicles' tyres, she was taken to via Tasso, interrogated and later released thanks to the statements of GAP member Giorgio Labò and Lina Trozzi. She was awarded the silver medal for military valour.

Trozzi Lina was born in 1916, into an anti-fascist and socialist family. After 25 July 1943 she joined the underground resistance groups in Rome, participating in sabotage activities during the occupation. Surprised by the SS at the home of Gioacchino Gesmundo, she was imprisoned in Via Tasso and, despite being interrogated for nine consecutive days, she managed to free Maria Teresa Regard, who was arrested with her. She was put on trial, sentenced to ten years' imprisonment, and deported to Germany. On 29 April 1945 she was freed by the Allied army from the women's detention centre in Aichac (Upper Bavaria)
Tucci Riccio Maria Adelaide was born in 1911, the wife of a member of the Regia Marina (Royal Navy) Resistance, Tullio Riccio. She was arrested on 18 February 1944 on charges of being a member of the Regia Marina underground resistance, in which she actually played the role of courier. She was taken to via Tasso and interrogated. Obtaining no useful information, the Nazis released her on 12 April 1944, thanks to the intercession of Trude Zeiss.

Zeiss Trude, a German citizen, former schoolmate of Kappler, imprisoned in via Tasso for her actions on behalf of many arrested Italians, but in particular for her relationship with the Jew Dino Eminente. 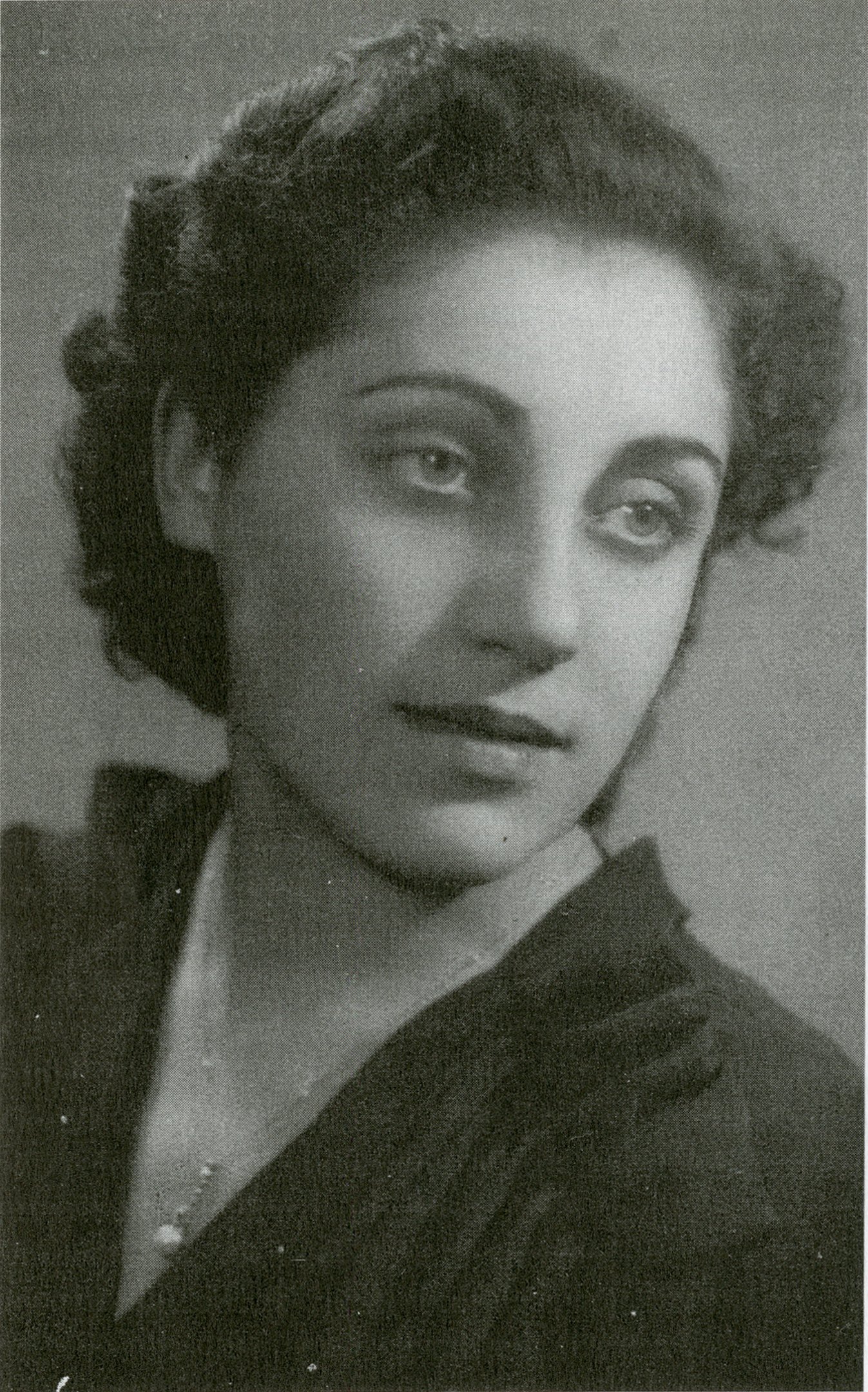 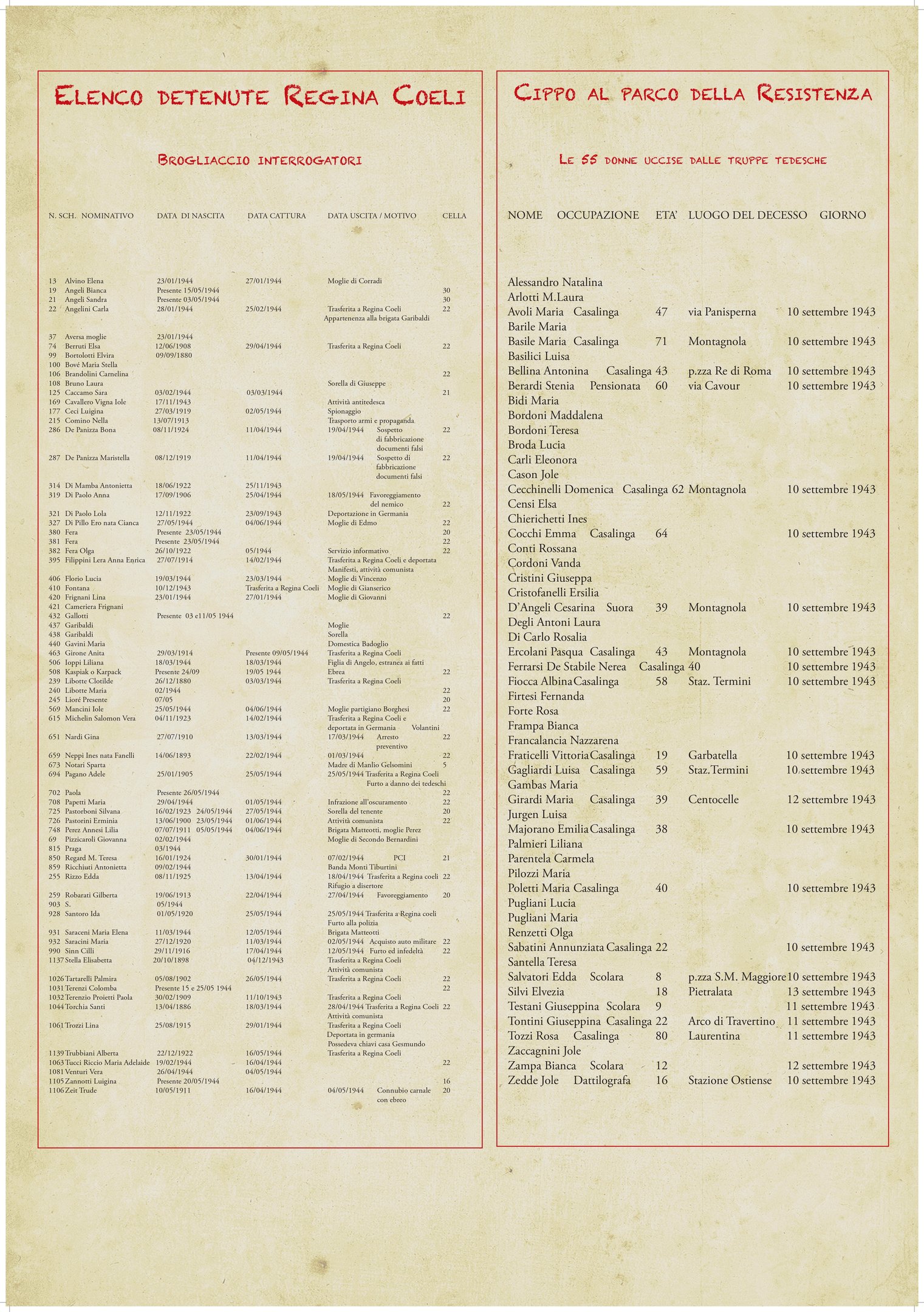