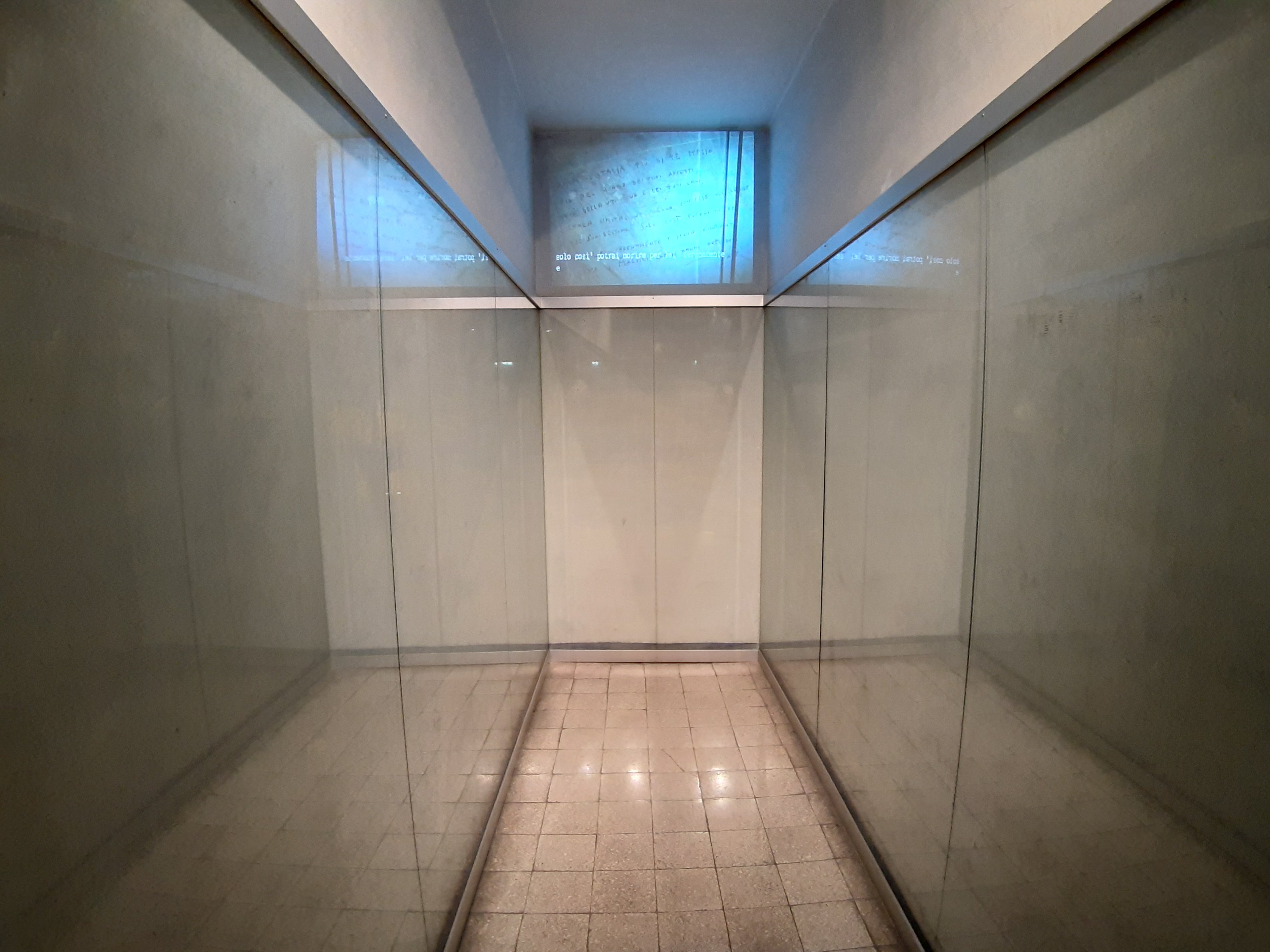 On the second and third floors, in areas that normally serve as storage rooms in an ordinary apartment , there is a narrow, windowless space, which was used as an isolation cell. This was the cell for an inmate kept in isolation and without food to weaken his resistance, a prisoner deemed particularly important for the information he might reveal if succumbing to the ferocious torture he was subjected to during interrogations.

Writing and calendars can be seen on the walls, which were not covered with wallpaper, scribbled by prisoners to count the passing days and keep in touch with reality, as well as to leave a trace of their existence. A prisoner would write with anything available to him: a nail removed from his shoes, a pencil butt that he had managed to keep hidden, or even his finger nails.

Literary quotes can be seen in the second floor cell.

Ah, slavish Italy, thou inn of grief,
vessel without a pilot in loud storm,
lady no longer of fair provinces, but brothel-house impure! (Divine Comedy, Purgatory, canto VI),
phrases in Greek, exhortations to resist torture, expressions of faith in a liberated Italy.
Arrigo Paladini's graffiti was present in several places: *1 his signature is followed by the words “sentenced to death”, the “black box" with the calendar he himself etched, showing the day of his capture and the days of torture indicated with the word “blows" and his spiritual testament:
“I will leave life when the future smiles at me most, at the dawn of the most beautiful day. No regrets. The certainty of having fulfilled all my duties as a soldier, following the dictates of my conscience; the knowledge I have given my all to the ideal that has always been my only life rule; the firm conviction I will leave behind me a track of pure honesty and linear conduct; mean that today I can face death in the most serene of spirits. In these hours I can only feel the privilege granted to me to be able to give everything of myself, every bit of vital energy, to the supreme cause of the motherland. To be able to meditate for a long time on the transience of life and on the pettiness of all things human before leaving them forever.
To God, who from heaven sees and judges all the miseries of our soul, who understands and forgive our sins, my deepest thanks for the steadfastness that sustains me today.
My father, who guides me from above, may rest serene in the knowledge his son has never waivered from the line that he gave with his example and his sacrifice.
To my mother, whom I knowingly leave in pain and desolation in order to maintain my dignity as a man and my honour as a soldier, I ask for forgiveness, and leave with her the supreme pride of having given the greatest gift to the motherland.
To Reretta,*2 who I love eternally, I give for safekeeping my memory and my spirit, with the precise request that my Idea shall live forever. Forgive me if I have crushed your happiness forever.
I give my life as an example to all Italians.
I ask forgiveness from all those I have unintentionally harmed: I myself hold no grudge against anyone.
Long live Italy!

Another calendar can be read here, that etched by general Sabato Martelli Castaldi, who would be executed at the Fosse Ardeatine. And the name of Pilo Albertelli was etched by Arrigo Paladini as a tribute to his professor, he too murdered at the Fosse Ardeatine.
There also appears “beware of" followed by the drawing of a rabbit, the nickname of an OSS (Secret Service) agent suspected of being a spy.
Then there is “3 evening Enrico gone north, safe. Life or death for me?”. This refers to captain Enrico Sorrentino, who would be shot at La Storta on 4 June, while Paladini, due to the chance breakdown of the truck that was supposed to transport him with other prisoners, would walk out alive from Via Tasso.

In the third floor cell there is graffiti with the English flag, referring to an English prisoner, proving that there was active participation in the Roman resistance, paid for with imprisonment, by allied intelligence exponents.
Also in this cell is the drawing of a cross and the word “Iesus”, which was certainly an invocation for spiritual help.

The variety of writings shows that different men worked together in the Roman resistance, some sustained by religious faith, others by human and civil motivations, all inspired by a love for freedom.

Arrigo Paladini was a lieutenant in the royal army. After 8 September he managed to cross the lines and join the army of the Kingdom of the South. The Allies then sent him on a mission to Rome as a liaison officer of the SIM (Military Intelligence Service). Apprehended after a tip-off, he was arrested and taken to via Tasso, where he would remain until the Liberation of Rome. After the war he taught History and Philosophy at the Liceo Scientifico of the Vittorio Emanuele II National Boarding School. When retiring in 1985 he became director of the Liberation Museum until 1991, the year of his death.

Elvira Sabbatini, Arrigo Paladini's fiancé, also participated in the underground struggle. Elvira and Arrigo married a few months after the Liberation of Rome. After Arrigo's death, Elvira took on the role of director of the Liberation Museum until her death in 2009.