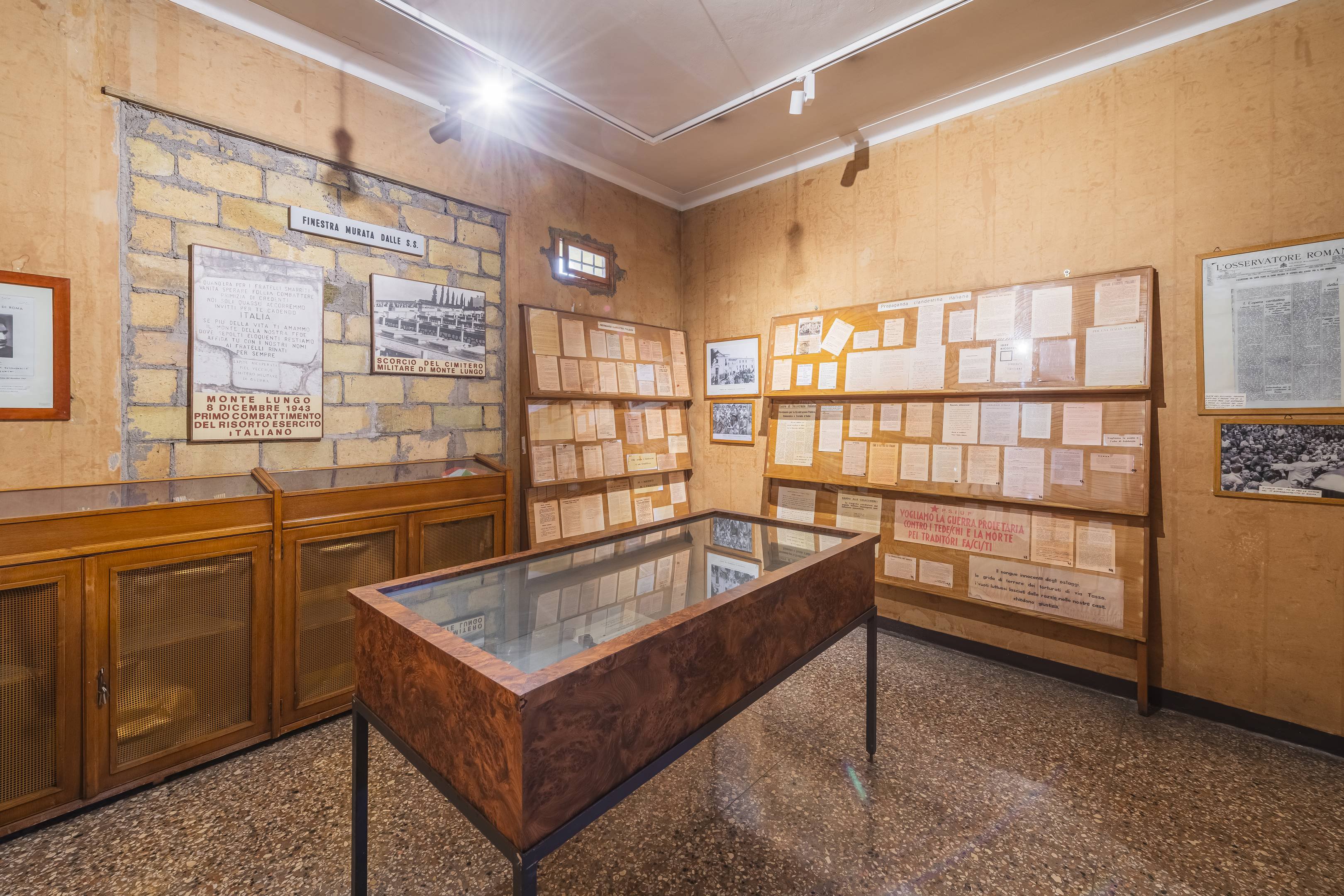 Cell 14 houses clandestinely printed materials: pamphlets, leaflets and posters that reveal the actions of different political forces, of all social classes, involved in the Resistance. The most interesting is that in German aimed at German soldiers, inviting them to defect. It is estimated that about 400 soldiers actually did so. It appears that once they were captured and relieved of their weapons, their families were informed in a written communication that they had died in combat. Therefore they did not officially exist. One such former soldier, living underground with a false Italian identity and fake documents, had difficulty after the war regaining his real identity. He underwent legal proceedings as an impostor, since for the German authorities he had died in battle.

On the left, as soon as you enter, there is the prison uniform worn in the Mauthausen lager by  Vincenzo Colella   , Italian army officer arrested by the Germans on 12 September 1943 near Caserta in Campania*1. Next to the door, on the right wall there is a map of central Europe showing the camps where  Internati Militari Italiani (IMO) were detained. On the wall opposite the entrance, to the left of the walled-up window, there is documentation on the battaglia di Montelungo    battle of Montelungo, fought by the Italian army of the Kingdom of the South on the southern front of Cassino from 8 to 16 December 1943. *2 There is also the identification card of partisan Adriano Ossicini, then a medical student, who at Fatebenefratelli hospital in Rome helped to hide people in danger of being arrested by the Germans (Jews and men of the Resistance). (indicate in-depth study no. 15 of the introduction:

** (second level note) The term “badogliano" had a negative connotation, since Badoglio represented the government that had betrayed the alliance with the Germans, by signing the armistice. All those who were loyal to the King and the government headed by Badoglio were called "badogliani". It should be noted that in the German Command note published by Agenzia Stefani, with which the population was informed of the German retaliation at the Fosse Ardeatine, the perpetrators of the Via Rasella attack were called “badogliani communist criminals”.

After the armistice of 8 September Vincenzo Colella, like many Italian soldiers, was on the loose. He was surprised by the Germans at Ruviano di Caiazzo in the Caserta region, still wearing his army uniform and carrying a weapon. He was taken prisoner, taken to Rome and imprisoned in Via Tasso, where he was tortured, then moved to the Roman prison of Regina Coeli, where he shared a cell with future Presidents of the Republic, Giuseppe Saragat and Sandro Pertini. He was sentenced to death, but the sentence was not carried out, deported to Germany and taken to several concentration camps, including Mauthausen. On his return to Italy, after spending a year in hospital to regain his strength, he became a teacher in a state school in Rome. He died in 2015 at the age of 100.

A similar fate befell Italian military internees (IMI). They were the privates, officers and NCOs who were captured after 8 September in Italy and on all war fronts, where until that moment they had been fighting alongside Germans as allies. Confronted with the choice of switching from the German side and fighting in the Wehrmacht or with the SS, they refused en masse and, after the establishment of the Italian Social Republic, they also refused to join the latter, while remaining loyal to their oath to the King, who represented the legitimate Italian State, and were deported to Germany. Considered as “badogliani” traitors, they were stripped of the “status” of war prisoners, and were called “internees”. As such, they did not enjoy the protection of international agreements, first and foremost the Geneva Convention, nor the protection of the International Red Cross and other humanitarian organisations. In the concentration camps they were subjected to “forced” labour, but despite suffering hunger, abuse and humiliation of all kinds, they continued to oppose any form of collaboration with the Nazi-fascists. By saying NO they paid a heavy price for their loyalty to the oath given to Italy. In all there were around 700,000 such internees, a large part of the Royal Army. Over 50,000 of them died in the camps, and as many died on their return to Italian due to diseases contracted in captivity.
Two to two and a half thousand Carabinieri of the capital were interned in German camps (the number varies depending on the source), after being deported on 7 October 1943, including those captured here and there in the days immediately following the armistice.

After 8 September international conventions required them, as police force agents, to remain in their place and pass to the orders issued by the German authorities. Due to their actions in defence of the local population, Kappler had deemed them unreliable, and on the very evening of 8 September they actually fought against the Germans. For these reasons they had to be "neutralised". This was done with the cooperation of the RSI. On 6 October general Casimiro Delfini, Commander-in-Chief of the Royal Carabinieri, carried out an order received from marshal Rodolfo Graziani, national Minister of Defence of the Italian Social Republic, ordering carabinieri to appear at their barracks and hand over their weapons, pending new orders. If they disobeyed, their respective families would be arrested. Of the approximately six thousand carabinieri present in Rome, about two thousand showed up, and the next day they were deported to Germany, and remained in prison camps until the end of the war, refusing to pass to the German side and join the RSI, despite the guarantee of being able to reunite with their families. Most of those who did not show up joined the Resistance and formed the Clandestine Carabinieri Resistance Front (FCRC).

The term “badogliano" had a negative connotation, since Badoglio represented the government that had betrayed the alliance with the Germans, by signing the armistice. All those who were loyal to the King and the government headed by Badoglio were called "badogliani". It should be noted that in the German Command note published by Agenzia Stefani, with which the population was informed of the German retaliation at the Fosse Ardeatine, the perpetrators of the Via Rasella attack were called “badogliani communist criminals”.

The battle of Montelungo

With the arrival of the armistice soldiers were left high and dry by the high command, so they abandoned their barracks and had to individually decide on what to do next. Those who managed not to be captured by the Germans joined the ranks of the Resistance, the clandestine Military Front or political formations formed in the aftermath of Mussolini's fall which, straight after 8 September, gave rise to the National Liberation Committee (CLN). Others managed to cross the lines to the South, and joined Italian soldiers stationed in the already liberated part of Italy, resulting in the creation of the Italian Liberation Corps. This Corps overcame the initial suspicions of the Allies and fought in the Battle of Montelungo, near Cassino, earning the esteem of US general Clark. At Montelungo for the first time an Italian unit fought as a co-belligerent alongside the Allies, paying a high price in terms of human life but gaining credibility in the eyes of the coalition.